In a world increasingly facing new challenges at the forefront of plasma scientific research and technological innovation, CNR and ISTP pledge progress and achieve an impact in the integration of research into societal practices and policy 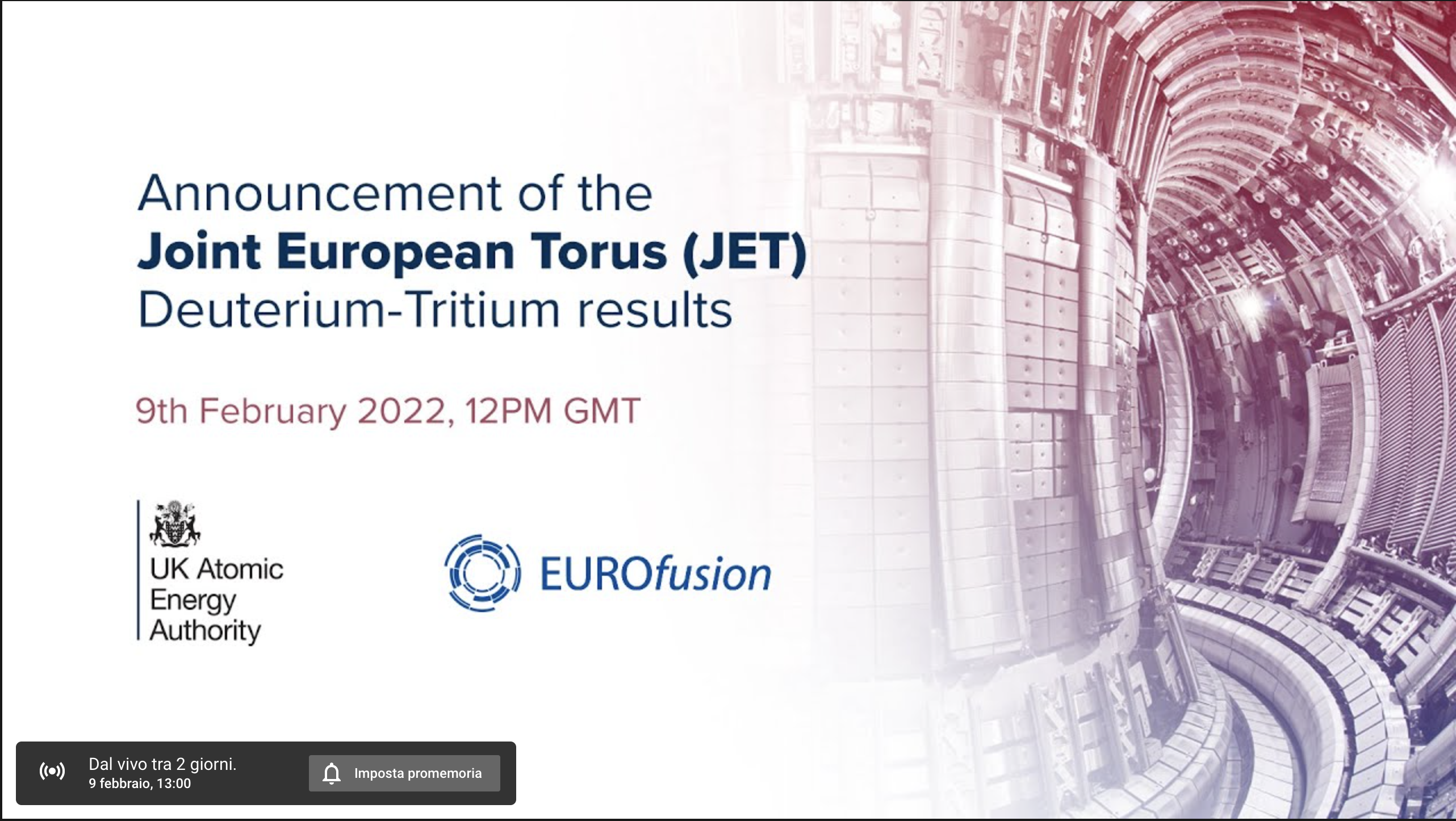 Fusion is the energy source of all the light and heat from the Sun and the stars, and has the potential of providing safe, sustainable and low-carbon baseload energy that complements other clean energy sources like wind and solar. Fusion could potentially supply a significant* share of the world’s energy for many thousands of years 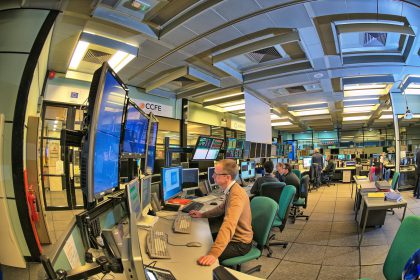 Record results announced today are the clearest demonstration in a quarter of a century of the potential for fusion energy to deliver safe and sustainable low-carbon energy.

Researchers from the EUROfusion consortium – 4,800 experts, students and staff from across Europe, co-funded by the European Commission and including Italian researchers – used the Joint European Torus (JET) device to release a record 59 megajoules of sustained fusion energy.

This achievement on JET, the largest and most powerful operational tokamak in the world at the UK Atomic Energy Authority (UKAEA) site in Oxford, more than doubles the previous fusion energy record of 21.7 megajoules set there in 1997. It comes as part of a dedicated experimental campaign designed by EUROfusion to test over two decades’ worth of advances in fusion and optimally prepare for the start of the international ITER project.

The record and the scientific data from these crucial experiments are a major boost for ITER, the larger and more advanced version of JET. ITER is a fusion research project based in the south of France. Supported by seven members – China, the European Union, India, Japan, South Korea, Russia and the USA – ITER aims to demonstrate the scientific and technological feasibility of fusion energy.

As pressures mount to address the effects of climate change through decarbonising energy production, this success is a major step forward on fusion’s roadmap as a safe, efficient, low carbon means of tackling the global energy crisis.

Fusion, the process that powers stars like our sun, promises a near-limitless clean electricity source for the long term, using small amounts of fuel that can be sourced worldwide from inexpensive materials. The fusion process brings together atoms of light elements like hydrogen at high temperatures to form helium and release tremendous energy as heat. Fusion is inherently safe in that it cannot start a run-away process.

The Joint European Torus (JET) fusion experiment  – which can create plasmas reaching temperatures of 150 million degrees Celsius, 10 times hotter than the centre of the sun – is a vital test bed for ITER, one of the biggest collaborative science projects in history. JET can reach conditions similar to those in ITER and future fusion power

JET was built and operated in Culham, UK, as a Joint Undertaking of the European Community since 1977. The facility has been operated by the UKAEA from 2000. The Euratom Research and Training programme has continuously contributed approx. 80% of the JET operation costs from 1977 until the end of 2021.

In its recent record-breaking experiment, JET produced a total of 59 Megajoules of heat energy from fusion over a five second period (the duration of the fusion experiment). During this experiment, JET averaged a fusion power (i.e., energy per second) of around 11 Megawatts (Megajoules per second).

The previous energy record from a fusion experiment, achieved by JET in 1997, was 22 megajoules of heat energy. The peak power of 16MW achieved briefly in 1997 has not been surpassed in recent experiments, as the focus has been on sustained fusion energy.

ISTP contribution to the Deuterium-Tritium campaign

ISTP has been actively participating for years in the various experimental campaigns of JET as part of the EUROfusion Tasks, covering scientific coordination roles, supporting the experimentation, through interpretative and predictive analyzes and with the development of innovative plasma diagnostics, some of which developed specifically for Deuterium-Tritium (DT) plasmas
In 2021, ISTP researchers took part in the JET DT campaign both on site, even during the pandemic, and off site, connected remotely to the control room. The main contributions provided to the DT campaign by ISTP in collaboration with UNIMIB are:

Scientific coordination of experiments and projects

Participation and support in experiments through

The Italian Participation in EUROfusion

ENEA - the Italian Agency for new technologies, energy and sustainable economic development – coordinates the Italian fusion programme participation in EUROfusion activities to which twenty-one partners contribute, including universities, research institutions and industries:
The EUROfusion programme within Horizon Europe includes also a contribution to the construction of the new DTT (DIVERTOR TOKAMAK TEST) research facility, under construction in the ENEA Research Center in Frascati as part of a consortium between ENEA, ENI, and various Italian institutions including CNR and universities.

A sustained pulse of deuterium-tritium fusion at this power level – nearly industrial scale – delivers a resounding confirmation to all of those involved in the global fusion quest. For the ITER Project, the JET results are a strong confidence builder that we are on the right track as we move forward toward demonstrating full fusion power.
This achievement is the result of years-long preparation by the EUROfusion team of researchers across Europe. The record, and more importantly the things we’ve learned about fusion under these conditions and how it fully confirms our predictions, show that we are on the right path to a future world of fusion energy. If we can maintain fusion for five seconds, we can do it for five minutes and then five hours as we scale up our operations in future machines. This is a big moment for every one of us and the entire fusion community. Crucially, the operational experience we’ve gained under realistic conditions gives us great confidence for the next stage of experiments at ITER and Europe’s demonstration power plant EU DEMO, which is being designed to put electricity on the grid.
As EUROfusion we designed this experimental campaign at JET to optimally prepare for the start of ITER by investigating the energetic processes that will come into play there and to prepare the next generation of fusion researchers. The experiments confirmed our predictions, motivating us in doing our best to ensure a timely success of ITER operation. The results are support for an early decision for a European DEMO power plant, as fusion is needed for long term decarbonisation of our energy supply.

THE SCIENCE BEHIND JET

Fusion research aims to copy the process that powers the sun for a new large-scale source of low-carbon energy here on earth. When light atoms fuse together to form heavier ones, a large amount of energy is released. To do this, a few grams of hydrogen fuels are heated to extreme temperatures, 10 times hotter than the centre of the sun, forming a plasma in which fusion reactions take place. A commercial fusion power station would use the energy produced by fusion reactions to generate electricity.

Fusion has huge potential as a low-carbon energy source. It is environmentally responsible and safe, using fuel that is abundant and sustainable. Pound for pound it releases nearly four million times more energy than burning coal, oil or gas.

EUROfusion is a consortium of 30 research organisations, and behind them around 150 affiliated entities including universities and companies, from 25 European Union member states plus the United Kingdom, Switzerland and Ukraine. Together they work towards a facility that can deliver fusion electricity to the power grid in accordance with the European Research Roadmap to the Realisation of Fusion Energy. The EUROfusion programme has two aims: preparing for ITER experiments and developing concepts for the future European demonstration fusion power plant EU DEMO. Another facet of the EUROfusion programme is to support diverse research projects in participating laboratories through the Enabling Research scheme. For more information: https://www.euro-fusion.org/, LinkedIn, Twitter #road2fusion

ITER—designed to demonstrate the scientific and technological feasibility of fusion power—will be the world's largest experimental fusion facility. ITER is also a first-of-a-kind global collaboration. Europe is contributing almost half of the costs of its construction, while the other six Members to this joint international venture (China, India, Japan, the Republic of Korea, the Russian Federation and the USA), are contributing equally to the rest. The ITER Project is under construction in Saint-Paul-lez-Durance, in the south of France. For more information: http://www.iter.org/

JET was built and operated in Culham, UK, as a Joint Undertaking of the European Community since 1977. The facility has been operated by the UKAEA from 2000. The Euratom Research and Training programme has continuously contributed approx. 80% of the JET operation costs from 1977 until the end of 2021. The Euratom Research and Training Programme (2021-2025) is a nuclear research and training programme with an emphasis on the continuous improvement of nuclear safety, security and radiation protection and fusion energy research. It complements the achievement of Horizon Europe’s objectives including in the context of the energy transition as well as contributing to the implementation of the European fusion roadmap.

Designed with love by HANDMEDIA

Designed with love by HANDMEDIA